The start of Day 2 of the shoot was a lot more relaxed than Day 1; the cake was already on-site and as finished as it was ever going to be. I arrived in East Lansing with enough time to go through wardrobe and makeup, and caught the shuttle over to the museum. Once I arrived, though, it was again a lot of waiting for things to happen. Throughout the whole process, I was amazed at how fluid the filming was. I didn’t find out for sure what was going to be happening to the cake until it actually was happening. At various points over the two days, the cake was going to be in the way of but not touched by Ben Affleck, be run into by Ben, or have a swipe taken out of the frosting by Jesse Eisenberg. The good news was that I was prepared for any of those things, but in the end, I think the fact of how long it would take to reset the cake if either of the last two things occurred overrode all other considerations.

The crew had me sit in the waiting area with several hundred extras for the first half of the day, because my scene wasn’t shooting right away. Most of the extras were dressing in evening wear for the party scene; there were a few waitstaff and bartenders, but I was the only chef. Because of this, it became a topic of conversation of what my role was. Everyone was excited to hear about the cake, and a bit jealous that I had more freedom to move than they did, not to mention that I was the only one in the area who had been allowed to keep their cell phone. After “lunch” with the crew after midnight – which was AMAZING, by the way – I was told to rejoin the chefs from University Club of Michigan State University downstairs by the cake. We had just wandered over to craft services for some coffee when one of the PAs came rushing over. “They’re ready for you, grab the cake and let’s go!” And just like that, it was back to filming.

Of course “back to filming” meant “stand in position with the cake by the bar they had set up for the next hour,” rather than sitting downstairs. I’m not sure what was more difficult at that point – standing for so long in one place, or trying to protect the cake when it was in such a small space with so much going on! I was not in the shot so had to stay out of sight. The extras that I had met earlier now saw the cake, and were amazed that I really hadn’t been kidding about the size and complexity of it. Those that were being positioned near the cake were giddy to be able to use it as a reference, to let their friends know where to find them on screen.

Where the Day 1 filming was at the bottom of the stairs, Day 2 filming was at the top of the stairs. Again, we all got to our places and did a couple of dry runs. Today’s process: Ben Affleck comes hurrying up the stairs chasing … somebody … the cake gets in his way, and he is unable to reach his target before they make their escape. Filming started, and each take was fractionally different from the next. In some, he paused while the cake passed in front of him. In others, he was moving faster and had to hold his arms up to avoid it. In still others, he collided partially with the other chef moving the cake with me. Zack Snyder also had us push the cake at different speeds until he found the speed he liked. In the end, it was one of the more understated passes that made the final cut, with Ben making a brief but necessary pause at the top of the stairs.

As with the first day of shooting, the cake was the center of attention between shots. During one reset, Ben Affleck paused on his way back to his mark, took a brief but close look at the cake, and remarked almost off-handedly, “This is a great replica of the Parthenon.” “Thanks,” I responded. He looked up. “Oh, YOU made this?” “I did,” I told him. “This is really impressive, great job!” And then he was back off to his mark. With all of the great work done by all of the members of the crew, it was phenomenal to be complimented on my work by one of the stars of the movie.

During another reset, I encountered Michigan Senator Debbie Stabenowand her people, who were effusive in their response to the cake, and who took a bit more time with me because of the local connection. Maybe one day I can do a huge cake for an election party! During one of the breaks, the behind-the-scenes photographer snapped a couple of pictures of me with the cake, which they sent to us a week or so after the shoot. Considering that this was about 3 o’clock in the morning, I was just trying not to look like I wasn’t deliriously happy about where I was and what I was doing, and I guess I overshot the mark a bit. I’m also pretty sure they didn’t realize that Ben snuck into the background of the picture that didn’t have me in it, which was pretty fun to see.

With what they believed to be my final scene on film, I headed back to wardrobe in the wee small hours of the morning. With the hour-plus drive home, I pulled into the driveway just as the kids were waking up for school. They thought that was pretty funny – my son exclaimed “Mama’s nocturnal!” We still had one trip back to the set to pick up the cake, and a small chance that they might choose to shoot something else, but everyone was pretty sure that we were finally done.

Next: It’s a wrap! (Literally) 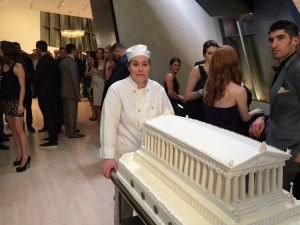 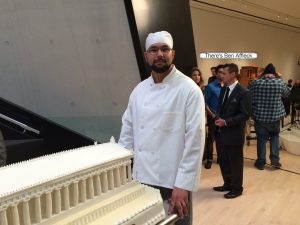