With the body of the building completed, it was time for me to get started putting together all of the pieces, big and small, that would turn it from a pile of plates of sugar into the Metropolis Public Library – or the Parthenon, depending on your point of view. Again, I built from the bottom up, first attaching the building to the sheet cake layers. It finally was beginning to look like the design concepts!

The next pieces to go on were the fifty-two columns (appropriate, if you’re a DC Comics fan). I had molded each column with a straw through the center of it, to enable me to place a dowel where each column would go. This way, I could ensure, as much as possible, that each piece was going to be in the precise location it needed to be, and that they could be maneuvered slightly to keep them as close to vertical as possible. With the columns in place, the final step before I started on the roof was to apply first a round and then a square column topper. This brought the height of the columns up to exactly the height of the building base.

The roof base was an interesting challenge. It was the only piece in the entire build where the styrofoam would need to be covered on the BOTTOM. This meant that the roof base needed to dry for a couple of extra days to ensure that the fondant wouldn’t sag, even in the small space on either side of the columns. At this point, I was also drying out the massive sheets of gumpaste that would form the roof. At 12 inches wide by nearly 30 inches long, even gumpaste takes a few days to completely harden. Before the roof was attached, I also applied small ivory circles and white panels – nearly a hundred of each – that provided a much-needed depth and variation of color to the building.

Once the roof was glued to the roof base and the roof sheets installed and seamed, both with royal icing, I got to work on the pediments. I applied thin gumpaste strips to create the pediment “frame,” and then installed the white gumpaste from the molds I had created. I then installed the lamp posts on the corners of the stairs – the bead on top of the lamp was the only non-edible visual element of the project! The final step prior to frosting the “cake” layers was to decorate the roof with the pediment toppers, gryphons, and what we just called the “roof bumps” that went all along the roof edge.

As with many elements of this cake, it took some trial and error to get the exact color match between the ivory fondant and the white buttercream that I tinted, but eventually it was as close as it ever could be. With a bit of math, we figured out exactly how many more of those white panels would be needed for the frosted areas, and made a “jig” – a yardstick, with a whole bunch of toothpicks taped onto it. Not the most high-tech of solutions, but it worked! With the top of the cake frosted in ivory buttercream and edged with a white buttercream shell border to make it “look like a cake,” the final step was to attach the coins to the sides and corners, and the lettering to the ends of the cake base layer. All of this work wrapped up the night before our scheduled final design review, a week prior to the scheduled shoot in East Lansing.

The design review didn’t go perfectly – there was initially some concern about the color contrast of the cake, and a few of the roof bumps rattled off on a particularly rough stretch of South Blvd. on our way to their offices – but all of that was easily enough remedied after discussions with the design staff, and a bit more royal icing, respectively. In a bit of foreshadowing of things to come, everyone who passed by the hallway where the props team was reviewing the cake stopped by to examine it, ask us questions, and in some cases take pictures with their phones. It felt great to get that level of appreciation from the pros working on this huge production! I was especially pleased to be able to finally show the cake to Amy, without whom I would never have been standing there to begin with.

With a sigh of relief, we re-loaded the cake into the van to drive it home. After a bit of touch-up work, it was time for us to take our detailed pictures of the cake, and then on to East Lansing for filming! 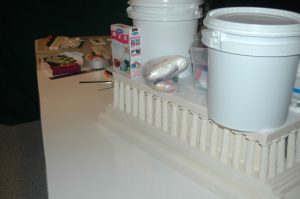 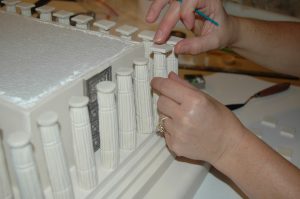 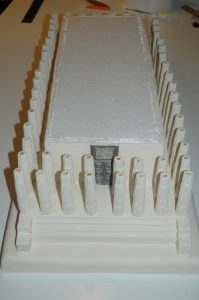 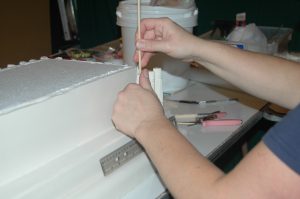 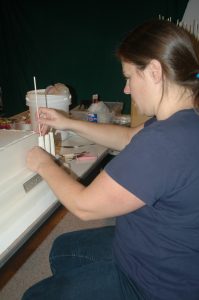 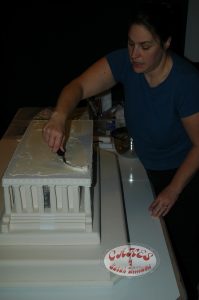