Rewind to early spring, 2014. I was still teaching at Michaels at the time, and one of my students was a transplant to the Detroit area while Batman v Superman: Dawn of Justice was filming here. Amy was checking a box on her bucket list, learning to decorate cakes while she was here. One day, she brought one of her practice cakes into work, and the film’s prop master happened by the accounting office where she worked. He asked who had brought the cake in, and she said she had. He said, “It’s funny, we need a cake for the movie.” Amy responded, “Well, you should talk to my instructor. She has a cake business.” She gave him my contact information, and a couple of days later, I got an email asking to meet to discuss a cake.

The meeting, which we had at a local Starbucks, couldn’t have gone a whole lot worse. When he heard “instructor” and “business” he interpreted “college” and “storefront,” not “craft store” and “home-based.” He was clearly nervous about my credentials, and to this day, I’m surprised he stayed. Still, he provided me the design concepts of what they wanted – a HUGE replica of the Parthenon, which paradoxically needed to be both architecturally- and scale-accurate AND look like a cake.

Without any true architectural work in my portfolio, I offered to put together a small sample to demonstrate my skill and the techniques I would use to build such a cake, that I would send him pictures of when I submitted my bid. He agreed, and the meeting ended.

At that point, I struggled with whether I actually WOULD submit a bid. I knew it was going to be a massive undertaking, far bigger and more complicated than anything I had ever attempted before. Eventually, I realized that an opportunity like this comes along once if it ever comes at all, and that I would regret not at least trying. I spent a couple of days designing and building a small chapel, making sure that the panel cuts and seams were perfect. We researched materials costs, making a few educated guesses along the way, and estimated the number of hours of labor it would take. That all went into my bid, and which I sent along with the pictures.

Next: Preparing for production (subtitle: Oh, so THAT’S how the movie industry works.) 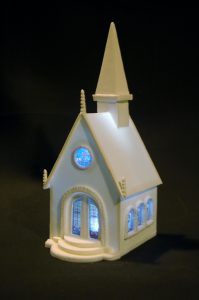 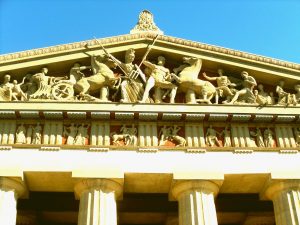