Chapter 2: Preparing for Production (subtitle: Oh, so THAT’S how the movie industry works.)

Once we peeled ourselves off of the ceiling from the excitement of getting the gig, it was time to get to business. They arranged to have me come out to the studio in Pontiac to meet with the props team and discuss next steps for the cake. Things were still very preliminary at that time; there was no firm schedule for when the cake would be needed for filming, and they hadn’t even made a final determination on the size of cake they wanted. It was amazingly cool to meet with the staff at the studio, as it meant getting a sneak peek at some of the final props! Several of the newspapers that appear in the movie were up on the walls, one of the Ducati motorcycles that appeared in the movie was there, along with tons of other cool items – and I couldn’t tell anyone about any of it! In amongst all of that work, it was a source of great pride to see that they’d printed an 8×10 of the little gumpaste chapel, which they had in a binder.

Eventually, the props department put together a full-scale model in cardboard to confirm the actual size that they wanted the cake to be. As it turned out, it was exactly the size they had originally specified on the design drawings. At that point, it was Bill’s turn to take the various design collateral that they had provided and work out the exact sizes for the foam dummy cakes that we would need. Scaling up the drawings from print to reality, and then subtracting out what was going to be fondant, gumpaste or buttercream was an arduous process, but eventually we were as happy as we were going to be with the dimensions, and it was time to order all of the supplies.

I contacted Guildcraft Foam Cake Dummies, who I had previously ordered cake dummies from, and walked through our exact specifications with them. They’re no strangers to the cake community’s need for extremely precise dimensions for showpieces, and I was absolutely thrilled with the product that was delivered. The ivory Satin Ice fondant and tylose powder – used to turn fondant into gumpaste – was sourced from Global Sugar Art.

The only remaining piece of prep was to put together an honest-to-God project plan (a first for me for a cake) that I would use to keep me on schedule, and ensure that I wasn’t forgetting any details, upon our return from a family vacation.The calendar was about to turn from August to September, and all of the true WORK was rushing toward me.

Next: Mold-making – If at first you don’t succeed, try, try again. 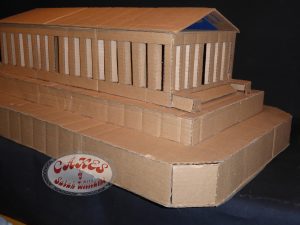