The morning of the shoot, I was a ball of nervous energy. Bill got all of the extras I had produced – buttercream frosting, decorative items, even whole roof panels, along with a ton of my tools – loaded into the back of the van for the trip to East Lansing. We loaded the cake into the van for the second time, and fortunately had very light late morning traffic the entire trip to the Eli and Edythe Broad Art Museum. Security at the museum was predictably intense, and we were not permitted to clear the gates until a member of the props team happened to pass by. The rest of the props team met us just inside the gates, and brought out the cart that the cake would spend the next three days on. With paving stones between the drive and the front door, they simply lifted the entire thing up – cake, cart and all – and carried it to the door to minimize the chances that something would rattle loose.

Once we had the cake to where the first scene would be shot, I went off to go through makeup and wardrobe. The props team explained that they looked at the cake much as they would if they needed a horse; it’s far easier to put the person who knows what they’re doing through wardrobe than it is to train an extra to do the right thing.

While I was going through wardrobe, Bill was sitting guard by the cake near the kitchen set that the first scene was set around. Seemingly every person on the crew that passed by the area stopped to examine the cake. Everyone was amazed by the detail that I had put into it and asked a ton of questions about it. When I got back, he was talking with someone, and filled me in on all of the interest it had received in my absence. We did one final review with Doug Harlocker, the props master, where I admitted to having a literal TINY bit of fun with the pediments – putting in miniscule Batman and Superman symbols on the ends of the pediment carvings. Sadly, he asked me to take them off – not that they ever would have been seen on-screen, but just for scrupulous accuracy. While we were doing this last review, they also took a look over the tools and materials that I had brought with me, and picked several tools to dress the kitchen set, just for some additional authenticity.

Beyond that, it was a waiting game for the next several hours. Bill and I kept going over the cake and finding little things that I could tighten up – raising the frosted corners of the top cake, filling in gaps in the gumpaste with royal icing, just the smallest little details that I hadn’t noticed previously. All the time, we kept having more and more members of the crew come by. I suspect that word may have started spreading about the cake, and people simply found an excuse to drop by the area and see it for themselves. Whatever the case, it was awesome to hear all of the compliments on the cake.

Now for the “embarrassing admissions” section of this entire crazy story. For the most part, the people who stopped to see the cake asked the same questions, and we fell into a pattern with our answers: Is it edible? What’s it made of? How long did it take you to build? Some asked more technical questions, and in conversation with the behind-the-scenes videographer, Bill noted to him, “She’s art, I’m engineering.” He apparently thought that was awesome, as we would find out later. With the steady stream of crew coming by, we didn’t take much specific notice of the guy in sweats and a leather jacket doing the same, beyond becoming slightly nervous about exactly how close he was getting to the cake while he looked at it. He asked a lot of questions about the production of the cake, which we answered at length, and he was extremely complimentary about my work on it.

An hour or so later, one of the Production Assistants was sitting down in our area, ensuring that we were keeping quiet while filming happened upstairs, when a large group of folks came down the stairs – including Leather Jacket Guy. The PA looks up, points over to them and notes, “Oh, there’s Zack Snyder.” In retrospect, ensuring that you’re familiar with the director of the movie you’re making a prop for seems an obvious thing to do, but I was so focused on the task at hand that it never occurred to me to do so. On the other hand, we must have seemed so calm, so nonchalant, as the guy who would determine whether the cake would even be filmed, much less make the final cut, examined every inch of it while asking us questions. I’m sure he came away with a sense of my absolute confidence in my work, though I doubt he’d have guessed the source of our calm.

The filming itself was pretty much par for how these things go, with one notable exception. Once all of the cast, crew, and extras were in the area, the props master called for quiet in the room. He stood by me and the cake and announced to the gathered crowd, loudly enough to ensure EVERYONE got the message, “Okay, this is the cake,” and pointed to the cake. “This,” pointing to the cake again, “is the backup cake. Let’s everybody be careful around it, please.” This was a surprise to me, and again, it felt amazing to have the production crew truly treating the cake like a work of art. With that done, they blocked out everyone’s path and movement, and did a couple of trial runs to ensure everyone had it down. I would be pushing the cart through an area at the bottom of a set of stairs, as Bruce Wayne – Ben Affleck – walked down, paused for me to pass, and then walked across to a server room. The extras serving as wait staff in the scene were all very excited about the cake, but for different reasons than the crew; it would serve as a landmark that they could tell their friends about! We probably did a dozen or so takes of that scene: push the cake, walk past Ben Affleck, get to the kitchen, cut, reset, repeat. There were several cameras shooting the scene from a variety of angles, and the one that ended up in the film captured me from behind; you can see the edges of the cake and a couple of the letters around me – if you don’t know that it’s there, you’d probably miss it.

One of the coolest portions of the first day came in between shots, as we were waiting for the next thing to happen. The production’s behind-the-scenes videographer grabbed us and the cake and we three went “backstage” behind the kitchen set. He did an impromptu half-hour interview with us, again asking about the specifics of the cake, how it was built, and that sort of thing. He got a LOT of close-up video of the cake, and just generally made us feel even better about the whole experience, although I am not accustomed to having a camera RIGHT THERE in my face – it’s tough to focus on talking to the camera, not to the person asking you questions. With a little bit of luck, when the Blu-Ray edition comes out, we might be part of the extras!

In the grand scheme of things, we were lucky. With the night shooting schedule for the party, they were going from 6pm to 6am, but we were told by the props team that after that scene, we were done for the night. We found a nice out-of-the-way place to stash the cake for the night, put some protective measures in place around it to keep it as safe as we could, and headed back to wardrobe to turn in my outfit. It was after 2am, and we were absolutely thrilled with how the day had gone.

Next: Day 2 of Filming 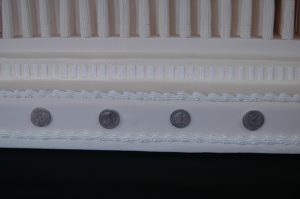 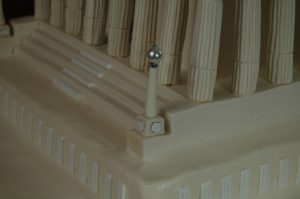 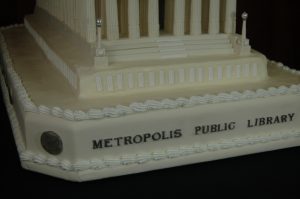 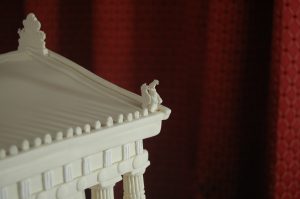 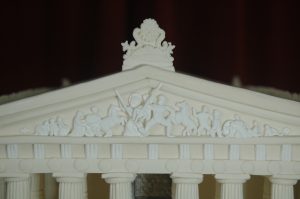