Once the base of the building was together, I could focus my energy on all of the repeating elements that were going to be so critical in ensuring that the final product looked clean and architecturally accurate – the columns, the gryphons, the pediment, and the pediment toppers.

There was no part of these molds that I didn’t go through several different versions of, but the columns were by far the most troublesome. I tried several different methods of forming my own columns. I tried polymer clay over and over again, and could never get the consistent thickness and taper. At one point I took a chance on carving a CARROT, but that didn’t work much better. Eventually I found a set of Wilton columns that were basically the right scale, but even those needed a lot of work. I first made a mold of one of the plastic columns, and created a new master out of polymer clay. Once that was dried, I carved the horizontal joint lines that you see in the final product, then used the master to create another mold that was used for the columns that went onto the building.

The gryphon was a challenge simply due to the size that was needed. It’s difficult to mold and detail a body and separate wings when the figure you’re working on could sit quite comfortably atop a dime!

The pediment figures, modeled after the West Pediment of the Parthenon, were based around the best reconstructions I could find online. Each character was formed and carved separately out of polymer clay, and then I created a mold of the entire thing together.

The pediment topper was based on a commercial mold that I found, though heavily modified. This was another case where I used polymer clay in the original mold, made my modifications, and created a second mold for the final product.

Altogether, I created eleven molds for this project, including two, for the columns and gryphon, which were two-piece molds to create a three-dimensional object.

Next: Final assembly – the devil’s in the details 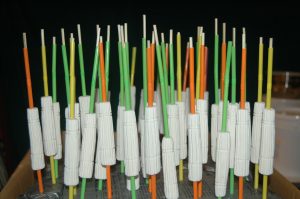 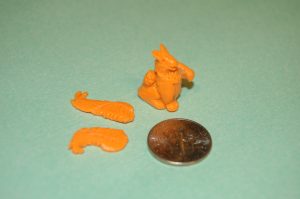 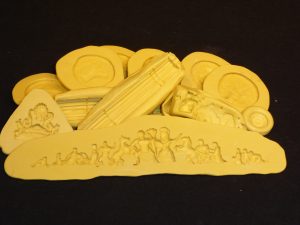